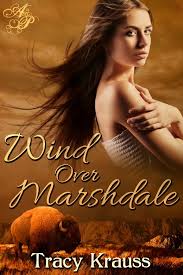 Publication Date: June 11, 2012
Marshdale. Just a small farming community where nothing special happens. A perfect place to start over… or get lost. There is definitely more to this prairie town than meets the eye. Once the meeting place of aboriginal tribes for miles around, some say the land itself was cursed because of the people’s sin. But its history goes farther back than even indigenous oral history can trace and there is still a direct descendant who has been handed the truth, like it or not. Exactly what ties does the land have to the medicine of the ancients? Is it cursed, or is it all superstition?
Wind Over Marshdale is the story of the struggles within a small prairie town when hidden evil and ancient medicine resurface. Caught in the crossfire, new teacher Rachel Bosworth finds herself in love with two men at once. First, there is Thomas Lone Wolf, a Cree man whose blood lines run back to the days of ancient medicine but who has chosen to live as a Christian and faces prejudice from every side as he tries to expose the truth/ Then there is Con McKinley, local farmer who has to face some demons of his own. Add to the mix a wayward minister seeking anonymity in the obscurity of the town; eccentric twin sisters – one heavily involved in the occult and the other a fundamentalist zealot; and a host of other ‘characters’ whose lives weave together unexpectedly for the final climax. This suspenseful story is one of human frailty - prejudice, cowardice, jealousy, and greed – magnified by powerful spiritual forces that have remained hidden for centuries, only to be broken in triumph by grace.

My take on this book:
An interesting cast of characters really brings this book to life. Each character finds themselves in Marshdale for different reasons but ultimately the same reason as well, and that's change.

At the age of forty Thomas Lone Wolf is the perfect picture of a Cree warrior, and is proud of his heritage. He has come to Marshdale to lobby for something that rightfully should be his anyway, but will the town accept it!Added to this is the strange dreams that Thomas is having and I just couldn't help but wonder what his story would be.

Rachel Bosworth finds herself in the tiny town of Marshdale because she is hoping that the slower pace of life just might be what she needs to get over her past. She isn't interested in men at all, instead she is focusing on being the best kindergarten teacher Marshdale has ever seen.
Pastor Todd Bryant came to Marshdale just over a year ago, looking for a place of refuge his job at the Community church is just to follow the program and keep the church running smoothly. That was something he was glad to do, after all the scandal from his last church had left him a little shell shocked, and wanting to hide out for a while. He had hoped coming to Marshdale would allow him and his wife Carol to start over, but so far Carol still had trust issues .Add to the mix that there is a practicing witch, a town gossip as well as several other characters had me wondering how the author would tie all of these stories together.

This story flows together smoothly. Of course I did have a few favorite characters, but overall liked them all. I felt empathy for most, and was easily drawn into the character of Rachel the most and I think it was because of the interaction of the school faculty, not to mention Steve Friest.  Overall I found this story an engaging read, with spiritual undertones, romance and a thread of mystery woven in that kept me reading. I thought the author did a great job of wrapping up the ending. While this is my first time reading any of Tracy Krauss' work it certainly won't be my last. Highly recommended!

This e-book was provided in exchange for an honest review.