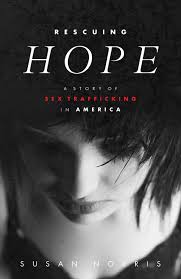 This book is also available as an e-book

Every two minutes, evil strips innocence from a child and sells her into slavery for sex. Not in a third-world country, but in the United States of America. Before you take another breath, the next victim will be tricked or taken from her family by a profit-hungry criminal.She could be a neighbor. A friend.Your sister. Your daughter. You.At fourteen, Hope Ellis is the all-American girl with a good life—until the day she tries to help her mom with their cross-town move by supervising the movers. When they finish, one of the men returns to the house and rapes her. Held silent by his threats, darkness begins to engulf her. But the rape proves to be the least of Hope’s troubles. In a gasping attempt at normalcy, she succumbs to the attention of a smooth-talking man on the subway. He promises acceptance. He declares his love. He lures her out from under the shelter of her suburban life.Hope’s disappearance sets a community in motion. She’s one of their own. They determine to find Hope, whatever the cost, before she’s lost forever.Will you?

My take on this book:

Hope Ellis' life changes forever at the age of fourteen when she is raped. She blames herself, and doesn't tell anyone, after all her attacker threatened that if she did he would come back. Everyone notices that Hope has changed, but they chalk it up to the cross town move that she and her mom just made. When she volunteers to work at the library she meets a girl named Nikki, and they start smoking dope together. When she meets a guy named T she has no idea what his plans are for her, and she quickly finds herself trapped with no way out!
"Rescuing Hope" is an eye opening read that deals with a topic that was at times difficult to read about, but it is a subject that we should all read about and become aware of. Gritty and so very realistic, a story that pulled me in and wouldn't let go, I finished reading this book in one sitting! While this book is a work of fiction, it is based on interviews with survivors of human sex trafficking. The character of Hope seemed so realistic. My heart broke for her as she blamed herself for something that wasn't her fault, and she allowed fear to keep her from talking to her mom or others. I couldn't believe that something worse than the rape could happen but it did, and it happened before she even realized it. I was on the edge of my seat hoping beyond hope that Hope would be rescued. Thing is so many young girls and women are never rescued!  This book is a must read for everyone, whether you have a daughter or not, because I can imagine this could as easily happen to a male as well as a female. Some of the subject matter makes it rated PG 13, but I do think our sons and daughters need to be warned that these things happen, not just in big cities but everywhere.