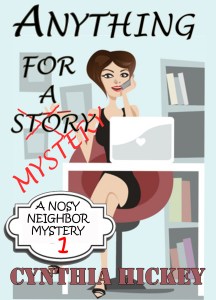 Buy a copy of Anything For A Story here. I guarantee you it's the best .99 cents you will ever spend!

Stormi Nelson, best-selling romance author, moved into her huge Victorian house in the private community of Oak Meadows Estates. When her agent tells her that her characters are becoming too cardboard and that she needs to get out and mingle with people, she comes up with the idea of a Neighborhood Watch Program. The only problem is … she’s the only member. On her first night of patrol, she stumbles over a dead body, meets a hunky detective, who happens to be her neighbor and clearly frustrated with her, and her mother, sister, niece and nephew arrive to shake up Stormi’s peaceful life. As she is immersed ever deeper into the mystery surrounding a neighbor’s murder, she decides to change writing tactics and write a romantic mystery based on her experiences. What follows is a frolicking good time as Stormi finds herself the nosiest neighbor of them all. Can she find the killer before she becomes the next victim?

My take on this book:
I love cozy mysteries, and when there is humor, a splash of romance that's even better. The main character is a romance writer who turns sleuth when she finds a dead body in her neighborhood. Plenty of twists and a not so easy to solve mystery made this a page turner that isn't easy to put down. As a fan of good clean reads this one certainly fit the bill. I feel like Cynthia Hickey has hit a home run with the first book in her Nosey Neighbor Mystery series, and I for one will certainly be watching for the next installment in the series! 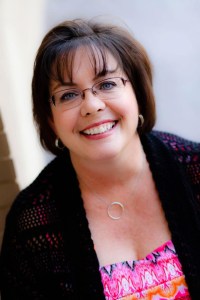 Multi-published and Best-Selling author Cynthia Hickey had three cozy mysteries and two novellas published through Barbour Publishing. Her first mystery, Fudge-Laced Felonies, won first place in the inspirational category of the Great Expectations contest in 2007. Her third cozy, Chocolate-Covered Crime, received a four-star review from Romantic Times. All three cozies have been re-released as ebooks through the MacGregor Literary Agency, along with a new cozy series, all of which stay in the top 50 of Amazon’s ebooks for their genre. She has several historical romances releasing in 2013 and 2014 through Harlequin’s Heartsong Presents, and has sold more than 150,000 copies of her works. She is active on FB, twitter, and Goodreads. She lives in Arizona with her husband, one of their seven children, two dogs and two cats. She has five grandchildren who keep her busy and tell everyone they know that “Nana is a writer”. Visit her website at www.cynthiahickey.com
Website: www.cynthiahickey.com
FB: https://www.facebook.com/pages/Cynthia-Hickey/151333448227549
Twitter: https://twitter.com/cynthiahickey
Go here for a chance to win an ecopy of Anything For A Story.
Tour Participants
June 2 –StoreyBook Reviews - Review
June 3 – Kelly P’s Blog - Interview
June 4 – Traci Andrighetti’s blog – Review
June 5 – Queen of All She Reads - Review, Guest Post
June 6 – Brooke Blogs – Review
June 8 – Cozy Up With Kathy – Interview
June 9 – WV Stitcher – Review
June 10 – Mochas, Mysteries and Meows – Guest Post
June 11 – Shelley’s Book Case – Review
June 12 – Socrates Book Reviews – Review
June 14 – dru’s book musing – Guest Post